A Fusion of Cultures | Solo Exhibition by Jacqueline Unanue 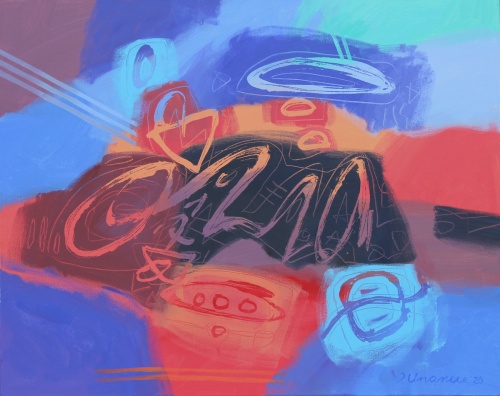 Twentieth Anniversary of Life and Art in the US

Evening visits by appointment only

In April 2000, I arrived in the U.S. for the first time from Chile, South America after being invited for a series of exhibitions in Washington DC, and Philadelphia.

I have celebrated my 20th Anniversary with a series of solo exhibitions starting at Saint Asaph Gallery, Bala Cynwyd (2019), Muse Gallery Philadelphia (2020), followed by a group show at Park Towne Place, Philadelphia presented by Inliquid (2020)

I was invited to exhibit at Mc Nichol Gallery at Neuman University. Due to the COVID 19 pandemic, the exhibition was postponed for 2021. I am happy to be presenting to finally my retrospective exhibition titled A Fusion Of Cultures that includes work created from 2010 to the present under the same Anniversary concept.

For me, the fusion of cultures and experiences has been very prominent in my work. It’s very interesting for me to show this extraordinary process that began while living and working in art in the U.S.

Jacqueline Unanue is a Chilean-American artist of Spanish ancestry living and working in art in Philadelphia since 2000.

She studied design at the Universidad de Chile, Valparaíso, and received formal training in drawing, painting, art history and textile art. While a student, she became interested in the rock art found in Chile where she met world-renowned archaeologist, Hans Niemeyer, who soon became her mentor. Together with her husband Ricardo Guajardo Romero (also an artist and designer) she traveled extensively through Chile’s Atacama Desert doing on-site rock art research. In Spain, she studied the pre-historic paintings of the Altamira caves in the Basque Country, the home of her paternal ancestors.

In 1989 Unanue received the Valparaíso Art Critics Association in Chile. She was awarded grants sponsored by the Directorate of Cultural Affairs of the Ministry of Foreign Affairs of Chile (DIRAC) for her solo exhibits at Guayasamín Foundation in Ecuador (1997), and at the Inter-American Development Bank in Washington DC (2000). In 2015, she received the Latin American Women in Art and Cultural Tribute recognition in New York. Recently, Ms. Unanue was awarded the 2021 Illuminate the Arts Grant for Individual Artist by the Creative Philadelphia and the City of Philadelphia.

Jacqueline Unanue’s work has been shown in both solo and group exhibitions around the world, specifically Spain, Finland, Ecuador, Argentina, and the United States in Washington D.C., Philadelphia, Chicago, and New York. Her work resides in many private and public collections in the Americas and Europe.