Jacqueline Unanue in Strokes of Genius, Maryland Federation of Art 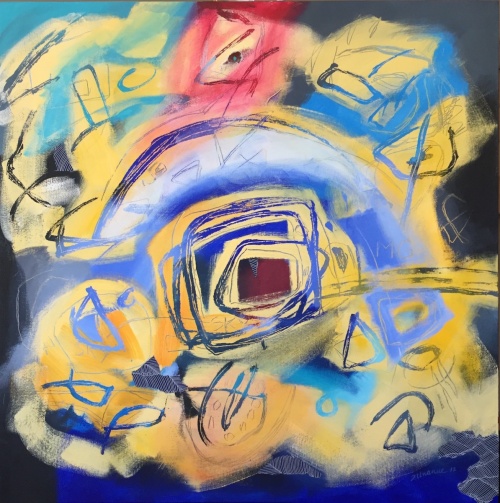 Jacqueline Unanue has been selected in the Strokes of Genius Exhibition juried by Joey Mánlapaz.

In this painting, Unanue has been working inspired by 3rdStreet Gallery fellow member Marjorie Grigonis, who recently passed away. Unanue always admired Grigonis' art, feeling a connection with her abstract and spontaneous painting. She was intrigued how she used her big surface yellow color, for that reason, Unanue titled her work: Yellow Sky, as one of the Marjorie’s artwork title. She painted using Marjorie’s inherited paintbrushes, while listening to her favorite jazz music of Miles Davis. In a very happy coincidence, Unanue found the Miles album titled: Miles in The Sky, matching with the spirit of her homage painting for MG.

Jacqueline Unanue is a Chilean American artist of Spanish ancestry living and working in Philadelphia PA since 2000.

Unanue studied design at the Universidad de Chile de Valparaíso, as well as training in drawing, painting, art history and textile art. While a student, she became interested in the rock art found in her native country. She traveled extensively through Chile’s Atacama Desert, doing on-site rock art research. She also traveled to Spain to study the pre-historic paintings of the Altamira caves in the Basque Country, which being the home of her paternal ancestors, connected her to her roots.

In addition to numerous individual and group exhibitions in Chile since 1983, Unanue has also exhibited in Spain, Finland, Ecuador, Argentina, and the United States—in galleries in Washington D.C., Philadelphia, Chicago, and New York. Her work can also be found in many private collections in the Americas and Europe. In 2015, she received the Latin American Women in Art and Cultural Tribute recognition in New York.

She currently lives in Philadelphia with her husband, Ricardo Guajardo. She is represented by the 3rd Street Gallery, Philadelphia.