From the New World : Recent paintings by Jacqueline Unanue 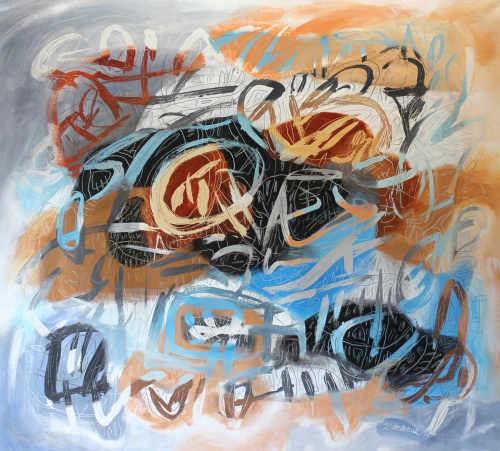 This series of recent paintings is mostly inspired by the Czech composers Antonin Dvorak’s Symphony From the New World, and Bedrich Smetana’s My Fatherland symphonic poems. Jacqueline has also been inspired by the Chilean composers Juan Orrego-Salas (Sextet for B flat clarinet, string quartet & piano, Op. 38, movement 3. Scherzo) and Enrique Soro (Danza Fantástica.)

"Immersed in this music as I painted, I felt it flow through me physically and found myself expressing both the movement of the music and my own emotions in free and spontaneous brush strokes that are musical as well as gestural."

The resultant paintings serve as coded maps, leading the viewer to the Illo Tempore where, over time, our roots spread wider and wider until we are part of a universal root system without cultural, territorial, or continental distinctions. This journey toward universal origins intrigues her. Its spontaneous appearance in the work has been deeply satisfying to her both as a painter and as a human being.

Chile, the country of her childhood and early artistic origins, is firmly recorded in memory. Those memories are meshed with both the experiences she had in my many travels to Spain to connect with her father’s ancestral roots and also with her experience in the United States where she has lived for years and where she continues to develop an artistic vision formed by my multi-cultural experiences.

In 2015 parts of this series will be exhibited in Barcelona, Spain, and in Viña del Mar, Chile as well.

Jacqueline Unanue was born in Chile. She studied design at the Universidad de Chile de Valparaíso. She arrived US in year 2000, invited to a solo exhibition at the Inter American Development Bank, IDB gallery, Washington DC. Since then she lives and works in art in Philadelphia.

In addition to numerous individual and group exhibitions in Chile since 1983, she has also been exhibited in Spain, Finland, Ecuador, Argentina, and the United States—in galleries in Washington D.C., Philadelphia, Chicago, and New York. In June 2013 she exhibited in Barcelona, ​​Spain. She is represented by the 3rd Street Gallery, Philadelphia.