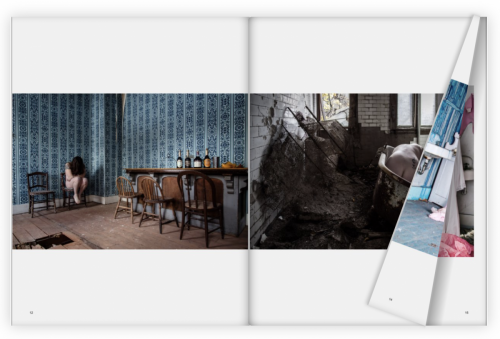 publication
Sarah Bloom has been taking self-portraits as her primary form of artistic expression since 2006. The exploration of identity as a woman entering middle age has emerged as a persistent theme in her work, most expressively with her self-portraits in abandoned places. Akin to the stages of grief, she faces the idea of aging at first with dread, then resistance, and ultimately acceptance. In her experience, these stages are non-linear.
Sarah R. Bloom is an artist and photographer working in the Philadelphia region. Her work has appeared in The Art of the State Show, The Perkins Center, Da Vinci Art Alliance and the Philadelphia Photo Arts Center along with various publications. In the past year she's had her photos featured in The Daily Mail, Philadelphia Magazine and The Huffington Post. In August, Philadelphia Magazine named her Best Visual Artist in their Best of Philly Issue 2015. In October, Instagram flew her out to L.A. to take part in a pop-up art exhibit celebrating inspiring women of Instagram.
more information:
Sarah Bloom website >
Preview and Buy the magazine >