Gaiamama, Meditations, 20th Anniversary Exhibition of Life and Art in the US | Solo Exhibition by Jacqueline Unanue 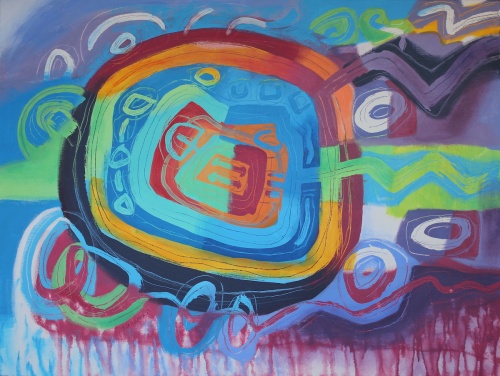 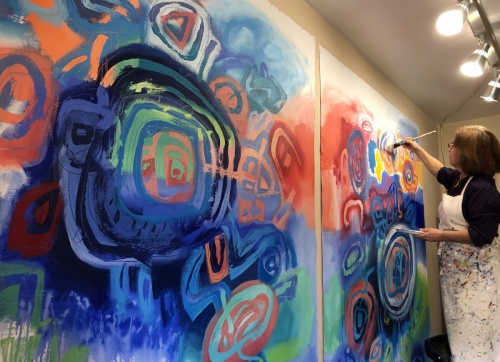 Muse Gallery Philadelphia is proud to host Gaiamama | Meditations, a solo painting exhibition of work by Jacqueline Unanue celebrating her 20th Anniversary of Life and Art in the U.S. Her recent work features colorful large-scale paintings.

In April 2000, I arrived in the U.S. for the first time from Chile, South America after being invited for a series of exhibitions in Washington DC, and Philadelphia. To celebrate my 20th Anniversary, I will have three exhibitions in venues throughout Philadelphia.

For me, the fusion of cultures and experiences has been very prominent in my work. It will be very interesting for me to show this extraordinary process that began while living and working in the U.S.

The exhibition at Muse Gallery includes:

The series, Gaiamama (2019-2020), which symbolizes my hope that it is still possible to extend the ties that unite us as humanity, and thus be able to understand the responsibility that each of us have as inhabitants in the protection of our endangered planet Earth. I have created this title to express a universal idea that emerges from two concepts—— that of Pachamama (the Andean Mother Earth); and Gaia  (the primitive goddess of the Land of the Greeks).

The painting Awakening Too (2019) was created as a way of supporting the social movement of my country Chile. It was a collaboration with my husband, artist Ricardo Guajardo Romero.

And my recent series, Meditations (2020) was created during the COVID-19 quarantine. This new body of work was intended to interpret the current moment of the whole of humanity—the isolation, the loneliness, and the connections that unite us as humans, all giving us hope.

Jacqueline Unanue is a Chilean American artist of Spanish ancestry residing in the United States since year 2000. She studied design at the Universidad de Chile de Valparaíso, Chile, and received formal training in drawing, painting, art history and textile art. She traveled extensively through Chile’s Atacama Desert, doing on-site rock art research. She also traveled to Spain to study the pre-historic paintings of the Altamira caves in the Basque Country, which being the home of her paternal ancestors.

In 1989, she received the Critic’s Award in Visual Arts from the Valparaíso Art Critics Association in Chile. In 2015, she received the Latin American Women in Art and Cultural Tribute recognition in New York.

In addition to numerous individual and group exhibitions in Chile since 1983, has also exhibited in Spain, Finland, Ecuador, Argentina, and the United States—in galleries in Washington D.C., Philadelphia, Chicago, and New York. She was awarded grants sponsored by the Directorate of Cultural Affairs of the Ministry of Foreign Affairs of Chile (DIRAC) for her solo exhibits at Guayasamín Foundation in Ecuador (1997), and at the Inter-American Development Bank in Washington DC (2000). Her work resides in many private and public collections in the Americas and Europe.

Established late in 1977, the Muse Gallery is an artists' cooperative dedicated to encourage and promote its members’ artistic expression through abstract, conceptual and representational forms. Reflecting an aesthetic that awakens awareness, the Muse Gallery affirms the shared experience of art between the artist and the community.